What makes the city of Johannesburg stand out against all the other cities in South Africa? Well, first of all, this city is the only one out of the whole Africa to be ranked within the 88 other countries included in the report of the Global Financial Centres Index compiled in March 2017. The city ranked 59 and it remains its stable position without any decline seen over the past years. 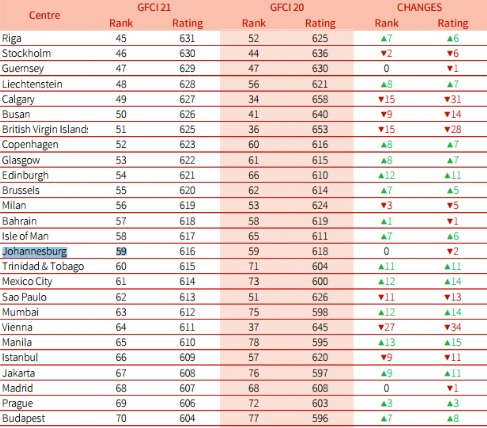 It is important to know what sort of factors determine the cities being included in such lists. The authors of this particular report used three main measures according to which they determined those financial centres, their rankings and their competitiveness. One of the dimensions, called connectivity, identifies how well known around the city is the city and how connected it is to other financial centres (for instance, how the banks in Frankfurt are getting more and more connected to the banks in Asia). Another one - diversity - shows how extensive and vast are the city’s financial industry sectors. And the last measure titled speciality focuses on the depth within a financial centre in sectors of investment management, banking, insurance, professional services and government and regulatory. This sort of measuring points are quite clever and beneficial: if Johannesburg’s position were to decline, it would be easier to see changes in the key areas.

Besides, it seems like Johannesburg has always excelled other cities in South Africa in this field. For example, in the study conducted by MasterCard in 2008, Johannesburg ranked 11th as the most important city among emerging market countries, meanwhile Cape Town and Durban were ranked only 33rd and 37th.

Middle East and Africa, in general, could be called a developing world. That is why such fast-growing financial markets are so important to international investors, distributors and retailers, and are always worth mentioning. After all, such achievements and improvements dictate the overall well-being of the city: Johannesburg’s residents benefit from a higher standard of living and the city, altogether, is getting ahead, while its markets are growing faster.

It’s safe to say that you should take advantage of this opportunity and go find a job in such an advanced city like Johannesburg - the financial centre, where your skills are needed!