Bakubung platinum mine
Komatipoort
6 minutes ago

36 years old, female
I'm looking for drivers positions in fork lift,cramp trucks and also operators over head crans,plant operators,I'm also gud at controlling the conveyors,wire machines ,ima fast learner, I work at sappi as an outside operator where we control all the product with machines and stack them
19 minutes ago

41 years old, male
Im looking for driving workn. I have C1 with PDP. My positive points are pmatient, communication and truthful.
2 hours ago

23 years old, female
The job that am looking for is being a griller, or cashier due to the experience of that am having I fitt to be a cashier I have a good customer service.
2 hours ago 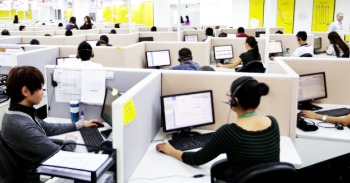 The importance of call centre industry in South Africa
South Africa was once strongly believed to be a country, whose economy and development strongly depended mainly on agriculture and mining sector. One thing lead to another, and now the country has some other industries dominating - sales is one of the sectors that now
J
Read full article
How to handle clients with disabilities in a restaurant? Seeking a career in coffee industry: how to be a coffee barista? Things you should know about tipping in South Africa What is a successful restaurant manager? Travel agents. Are they needed in South Africa? Complexities in the sales managing Direct sales prospects in South Africa Telemarketing - an important approach in sales Top employers in Johannesburg
J
More job news
Job search with us
Create alert and get new job offers from current job category and location everyday

Jobin.co.za history in South Africa started in 2011. Our huge local and international employment experience let us to grow and to become one of the most popular job search website in South Africa. You can post job offers, create your CV or order additional employment services - we guarantee you maximum efficiency and reach to your job advert.

Jobin.co.za has unique applicant system, where candidates can easily apply to job positions and employers are able to offer jobs for candidates with just one click. The only thing you need is to post your job offer or create CV on Jobin.co.za.

We are happy to help reduce unemployment rate in South Africa, so let's move South Africa forward together!

Where to look for a job?
Most popular cities for jobs in South Africa are Gauteng, Johannesburg and Pretoria. People browse jobs in many different platforms, but one of the most popular is here - Jobin.co.za job search engine with many different jobs and cvs. Other main job search sources are pnet jobs, careers24, gumtree jobs, glassdoors, indeed jobs and many others. In all job websites you will find different jobs in different cities, so you should definitely use job search and specify what job are you looking for. Search for jobs, grow your career and use all possibilities which this platform can give you. Knowledge and initiative are the main keys to get a job in South Africa.
If you're looking for a job abroad
If you're thinking about working abroad - outside South Africa, then you'll face with the new challenge of different currencies. Because of huge unemployment in South Africa and small wages, many of us, South Africans, thinking about emigration to other countries. Most popular locations are: United States of America, Europe, Australia, United Kingdom or Canada. So, if you're thinking about going to work abroad, we recommend to use currency converter. We are used to live here, in South Africa, and pay with rands in our country, but when you go to United States, the currency there is US dollars, so, you will need to know dollar to rand and rand to dollar conversion rate. The same in United Kingdom you will earn pounds, so you will follow pound to rand and rand to pound exchange rates. In Europe you'll earn euros, so rand to euro and euro to rand, in Australia - Australian dollars, so, aud to rand and rand to aud, in Canada - Canadian dollars, so, cad to rand and rand to cad. Basically, we recommend you to use currency converter, where you can modify - add or remove any currency and to see live conversion rate. When you analyze exchange rate charts, you can predict when to exchange your money. Also, it is important to find out where is the cheapest place to send money to your country.

If you think to go to the United States of America and start your own career there, we recommend to search here for jobs in the U.S.